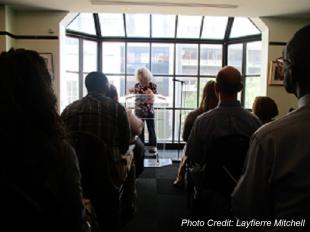 Situated on the banks of the Ohio River on Kentucky’s northwest border, Louisville is most frequently known as home to whiskey distilleries, the Kentucky Derby, and the famous Louisville Slugger baseball bats. However, more recently, it is also home to a community grappling with the death of Breonna Taylor, a Louisville resident and EMT, and public calls for police accountability.

Louisville’s strong community of advocates have continually demonstrated that organizing can successfully drive public policy for justice, particularly in regards to mass incarceration. Louisville residents and their families, especially their children, are directly impacted by the negative health, and socio-economic outcomes of mass incarceration, both while incarcerated and after release. Alarmed by the harm they were seeing mass incarceration cause to families and children in their community, five Louisville activists led by Judi Jennings, coordinator for the Louisville Family Justice Advocates, first reached out to CHR&R for community coaching in April 2015 to identify ways to address this health and equity challenge.

After a year of coaching with Attica Scott and with the aid of CHR&R resources like the Policy Advocacy Choice Tool, Jennings and her fellow team members were able to narrow their focus and identify three strategic policy options to pursue: improved data collection and sharing related to incarceration in the Louisville metro area; the use of family impact statements to create a clear and convincing standard for pre-trial release decisions and sentencing; and increased options for family visitation at the Louisville Metro Department of Corrections. With these three priorities in hand, their first step was to lead a Health Impact Assessment that helped further shape their understanding of how parent incarceration affects children’s health.

Jennings and the Louisville team still had a long road ahead to build support for their movement and make these changes a reality. They reached out to CHR&R again and began working with Raquel Luz Bournhonesque. Under Bournhonesque’s coaching, Jennings and her team were connected with the resources and guidance they needed to build community support for their goals. Bournhonesque helped the team recognize the importance of expanding their base to create a cross-sector coalition representative of partners from across the community. “We didn’t know we needed a multi-sector approach and I think that’s what you gave us. You helped us understand that and that’s been really powerful,” shares Jennings about the support Bournhonesque provided. By expanding their network, the Louisville team now had input and buy-in from those they would not normally connect with: local businesses, health professionals, youth advocates, faith-based organizations, and more. This multi-sector approach coupled with CHR&R resources empowered the Louisville team to engage the different stakeholders they needed to build a strong, diverse, and sustainable coalition, which was critical on their journey to change deep-rooted policies and systems.

Through collaborative, community-led preparation calls and monthly coaching sessions, Bournhonesque provided structure to the Louisville team’s advocacy work, laying the groundwork for the progress the team continues to make, long after coaching has ended. This groundwork is rooted in an understanding of all the factors that shape health—a key lesson Jennings and team learned through their coaching, especially in regards to mass incarceration’s impact on health. Guided by this broadened understanding of health and armed with their new coalition-building skills, Louisville Family Justice Advocates went on to lead a series of community forums during spring and summer 2018 that brought key voices—especially people with lived experiences regarding mass incarceration—to the table and helped them build an even stronger coalition. Coaching opened the door to new opportunities for Louisville, including a learning exchange with Berea, Kentucky focused on addressing racial disparities and criminal justice reform. And more than two years since they finished their coaching, Louisville’s work continues to evolve, changing once again to meet the new challenges the coronavirus pandemic has presented to their advocacy efforts—from responding to prisons and jails stopping visitations to shifting coalition work to be remote.

While each community the CHR&R Action Learning Coaches have partnered with has their own unique story, Louisville’s journey is a powerful example of the impact strategic, multi-sector coalition-building can have in a community. “Building effective advocacy coalitions takes a tremendous amount of work and it’s a long haul. Creating, advocating, and passing policy is truly movement-building work and can take decades. Judi’s team has taken many of the fundamental steps that will ensure future policy success,” shares Bournhonesque. 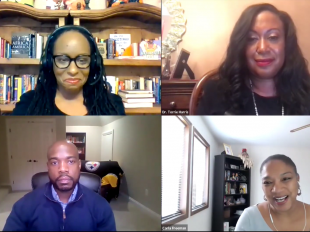