The gender pay gap is expected to persist for decades, particularly for women of color and in rural areas. What can we do to reverse this trend? How can we work together to improve the health and well-being of women and their children, entire communities and the overall economy? When women have opportunities, such as a fair chance for education, employment, and earnings, they are more likely to live longer and healthier lives. Their children are also more likely to fare better. 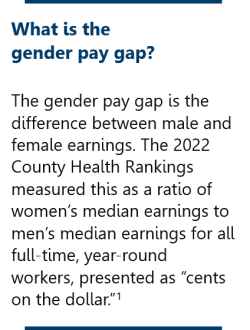 For the nation’s women who work outside the home, decades of economic insecurity and pay inequity were made worse by the pandemic. On average, women in the U.S. earn little more than 80 cents for every dollar white men make. The gap exists in nearly every county across the country but is at its widest in rural areas where women earn 77 cents, on average, for every dollar men make. Women also earn less than men for similar work in Southern and Western Plains states.

If trends of the last 35 years continue, it would take decades longer for women living in rural areas to receive equal pay for comparable work. For all regions of the country, by the earliest estimates, it would take white women until 2069 to earn what white men make, Black and Indigenous women until 2369 and Hispanic women until 2451, according to the American Association of University Women.

“The biggest myth that the general population has about the gender wage gap is that it’s getting a lot better,” said Dr. Jessamyn Schaller, an economics professor at Claremont McKenna College. “There is definitely still a substantial gender wage gap.”

The earnings lost as a result of the pay gap have meant women have had fewer opportunities to make ends meet, let alone save for emergencies or retirement.

Racial and gender discrimination have contributed to a system that has long undervalued and underpaid women. Biases exist at all stages of employment — from hiring and performance reviews to layoffs. The pandemic exposed the barriers that have prevented women and caregivers from participating in the workforce. A lack of supports — such as paid sick leave and family leave — and high child care costs placed additional burdens on women. This was especially true for those with low incomes and women of color – the two groups least likely to receive employer-provided benefits.

The gaps remain despite women’s educational gains; women have made up the majority of the college-educated population for more than 40 years. In addition, women have been segregated into lower-paying sectors such as service, education and health care. Yet even in these industries, men earn more than women for equal work. The wage gap widens as women attain higher levels of education and advance to more senior positions.

Several factors influence the differences seen in wages across the country. The types of jobs available are often limited in rural areas. Cultural norms in some areas also dictate the fields women enter and the prevalence of gender discrimination.

Most women face some barriers based on their gender regardless of their location. Yet women of

color experience wage gaps wider than their gender or race would explain individually.

“Being a woman of color is worse than a double whammy when it comes to pay inequality,” said Dr. Jessica Milli, an economist who studies the gender pay gap. “This means that the labor market might be discriminating against women of color in very specific ways. That there are systemic barriers that they face in advancing in the workplace that are unique to their identities as women of color.”

People experience bias and discrimination differently based on the combination of characteristics they embody, such race, ethnicity, gender, disability and sexual orientation, Milli said. For wage gap strategies to succeed, individuals, businesses and governments will have to employ a multi-faceted approach.

A backdrop of discrimination and inequality

Women’s participation in the labor force dropped to a 30-year low during the pandemic, the result of layoffs and added caregiver responsibilities. Those who remained, particularly those with lower incomes, were more likely to hold jobs that defined them as “essential workers” in health care, social work, government, and community-based services. Still, those women earned much less than their male counterparts.

Sexism, exploitation and bias have contributed to the gender pay gap. At the same time, efforts to bring fairness and opportunity to all have been a part of our nation’s history. The 1963 Equal Pay Act made it illegal to pay men and women different salaries for similar work. At the time, women made 59 cents for every dollar men made. Nearly 60 years later, the gap has closed by 21 cents.

In 1972, the Equal Rights Amendment passed — making it illegal to deny women any rights on the basis of sex. But opposition groups prevented its ratification. Today, community leaders are working together to erase the wage gap, including in Kansas City, Missouri.

Governments, employers and communities can ensure women receive equal wages for equal work. An economy that works for everyone includes equal pay in living wage jobs and work-family supports. Promising policy solutions include:

Transparency laws. Some states and cities have passed laws that require employers to report gender wage gap data, prohibit employers from asking about salary history, post jobs with pay ranges based on skills and qualifications, and ban employers from preventing employees discussing their pay.

Higher wages. Advocates for equal pay recommend raising the minimum wage and ensuring that employees are paid a living wage, or the amount required to pay for basic needs. Raising the minimum wage has the potential to decrease disparities by gender and race/ethnicity. Women stand to benefit most, as women account for just over half of workers who would benefit from a minimum wage increase, women hold two-thirds of tipped-wage positions, and women are more likely than men to be employed in low-wage sectors such as personal care and health care support roles.

Explore the gender pay gap in your county

Click on any county in the map below to see gender pay gap.

1 Using “Gender Pay Gap” to describe the ratio of women’s median earnings to men’s median earnings follows common naming conventions and maintains consistency with other sources. However, it can contribute to the conflation and oversimplification of these concepts of gender and sex. Data for this measure come from the U.S. Census Bureau, which words the question around sex to intentionally capture an individual’s assigned sex and not their gender.