Where everyone chips in to improve health: How United Way of Greater Lafayette helps channel community assets 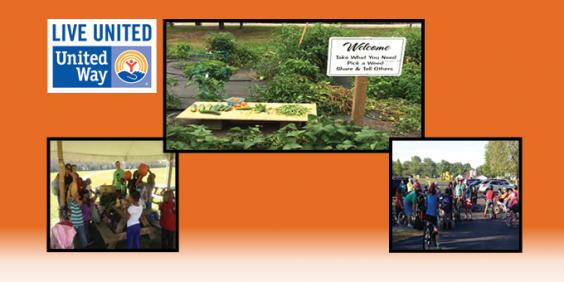 Fundraising can certainly be a challenge for community health improvement efforts, but in Tippecanoe County, IN, an interconnection of resources has proven to be just as effective as dollars.

Healthy Active Tippecanoe, a community initiative chaired by the United Way of Greater Lafayette, focuses the work of more than 25 different organizations with a common goal to reduce childhood obesity. They break it down into three areas of work: opportunity to exercise, access to healthy foods, and breastfeeding promotion. Those three topics were identified from a Community Health Needs Assessment and many community conversations.

In acting on the three focus areas, Healthy Active Tippecanoe (HAT) and the United Way used the resources of the Roadmaps to Health Action Center, part of County Health Rankings & Roadmaps. Looking at best practices and effectiveness for strategies, such as Safe Routes to School, helped the group choose what actions would work best. The benefit of researching the evidence became clear when it aligned the groups work with the local school district’s wellness plan. Many of the best practices were exactly the same because they had been highly rated by experts.

The program implementation, policy changes, and other efforts to support HAT are not funded by separate philanthropic donations or with individual grants. In one example, the group decided to emphasize breastfeeding as a way to boost child health. HAT’s hospital representatives took on that idea and have staff and materials that support new mothers. The same can be said for bringing federal food subsidy payments to farmers markets, expanding community gardens, and more.

“All the organizations have a stake in Healthy Active Tippecanoe and consider it as part of their missions,” said Laura Carson, Finance & Community Impact Director for the United Way of Greater Lafayette. “It’s not something extra; it’s an extension of everyone’s own work.”

To promote active transportation, the group facilitated a coalition of dedicated teachers with bike enthusiasts as well as parks and recreation staff to implement Safe Routes to School. That effort led to ongoing, long-term work involving the planning commission to promote infrastructure changes.

Similarly, representatives from faith organizations started a “veggie drop” program involving leftover produce. Church members come together at the end of farmers markets and pickup unsold fruits and vegetables to deliver to food pantries. Others in the group have provided healthy cooking classes at food pantries to support families as they try new healthier options.

HAT was a subcommittee of the local Chamber of Commerce begun in the early 2000s before the area United Way took a leadership role in 2013. The participating group’s work is channeled through the defined priorities, and that method has collected a diverse membership. Anyone in the community is welcome to help and can pick one or more of the focus areas to concentrate on.

“That’s how our membership has grown,” Carson said. “I get emails saying, ‘How do I get invited to come’ and I say, ‘just come and take part.’”

United Way Worldwide is a National Partner of County Health Rankings & Roadmaps, increasing awareness about the Rankings to their members, affiliates and allies and guiding them to the Roadmaps to Health Action Center to support them in taking action. Learn more about our National Partners here.