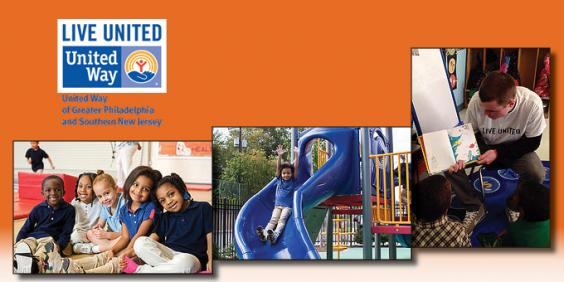 According to the 2014 County Health Rankings, Camden County ranked 17th out of 21 counties in New Jersey. United Way of Greater Philadelphia and Southern New Jersey (UWGPSNJ) is working to change this by transforming the community into a place where children and families thrive. Led by Executive Director Mike Moynihan, United Way and partners are improving educational outcomes, increasing access to healthy food, and encouraging physical activity in safe spaces.

Education is key to creating a vibrant community, and reading is one of its fundamental building blocks. Born to Read is an initiative implemented in Camden County that helps build a lifelong love of reading in children and ensure that, “by the end of third grade, kids are moving from learning to read to reading to learn,” according to Moynihan. Targeted efforts also address the inequalities that many at-risk children face. Research shows there’s one book for every 60 kids in at-risk neighborhoods versus 300 books per child in more affluent neighborhoods. United Way is addressing this disparity by pairing volunteers with Head Start children for one-on-one reading sessions. Subaru North America, an important partner, has also provided a steady stream of volunteers and books in poorer neighborhoods. The program is yielding results with as many as 650 families touched by the initiative.

In a community plagued by significantly higher levels of childhood obesity, New Jersey Partnership for Healthy Kids-Camden (NJPHK-C), a partnership with the YMCA and funded by the Robert Wood Johnson Foundation, is working to reduce childhood obesity through policy and built environment changes. While working with the Camden City Board of Education to create a comprehensive wellness policy, United Way and other stakeholders realized that only 40 percent of students eligible for the free breakfast program were participating because many weren’t able to get to school early enough for the meal. At the beginning of the 2013 school year, NJPHK-C created a six school pilot program to test serving breakfast in the classroom. Within a year, all 26 Camden city schools had in-classroom breakfast and program participation soared to more than 80 percent.  Ensuring that students begin the day with a healthy breakfast has also helped the student experience with teachers reporting a significant decrease in behavioral problems and improved academic performance.

United Way is also working with the Campbell Soup Foundation, the philanthropic arm of the Campbell Soup Company, to improve the food environment in Camden. One such effort, the Camden Healthy Corner Store Network, has resulted in more than 20 new corner stores, several Community Supported Agriculture locations, and eight Mobile Markets.

In order to increase physical activity, residents must first feel safe in their neighborhoods. As part of their work creating positive environmental changes, residents and neighborhood associations worked with United Way to implement a Safe Routes to Schools program. Supported by law enforcement, Camden now has specifically defined routes for children to use when coming to and from school. United Way also began an extensive program to reclaim local parks and playgrounds. The Northgate Park is one such example. Working with KaBOOM!, the local community was able to revitalize this area by making it an appealing place for children and families to congregate. Since park reclamation began, every day after school and all day in the summers, most local parks have some sort of structured physical activity. Soccer for Success, a program funded by the U.S. Soccer Foundation with substantial matches from Campbell Soup and United Way, provides more than 700 children and families with 60 minutes of structured play and healthy eating tips.

UWGPSNJ is creating what Moynihan calls “a perfect storm—a trifecta of programs, policy and systems changes” that work together to build a Culture of Health. Through fruitful partnerships, cross-sector collaboration, and an engaged community, the organization is contributing to sustainable changes that impact the lives of every resident in Camden.