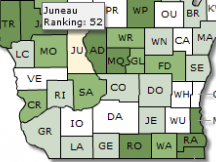 Juneau County, a small rural county in the southern part of Wisconsin, ranked either last or near the bottom in a series of health check-ups issued by the University of Wisconsin’s Population Health Institute (UWPHI).

Juneau County Health Director Barbara Theis wasn’t happy about the poor scores but over time she began to see the report as an opportunity to improve the county’s performance.

“We’ve used the Rankings to identify our areas of weakness and to move forward,” she said. “With a committed group of stakeholders, together we’re working to make Juneau County a healthier place to live.”

Researchers at the Population Health Institute relied on 30 measures of health, such as lack of health insurance, smoking rates, high school graduation rates and air quality, to size up the overall health of a county and compare it to other counties in the state.

After studying the 2008 Rankings, Theis learned that Juneau County scored poorly on a number of measures and would have to address the following weak areas:

To bring up the scores, Theis knew that the County Health Department and other stakeholders would have some tough societal problems to tackle. “We have lots of children living in poverty, high unemployment and a big problem with high school drop-outs,” she says. Research suggests that people who have better access to educational opportunities often end up in better paying jobs. People with higher levels of education also are more likely to have the opportunity to adopt and maintain healthier behaviors like taking a daily walk, she adds.

Focusing on Jobs and Healthier Behaviors

But leaders in Juneau, including those on the commerce committee and in the educational field, have leveraged that information to develop solutions for bringing jobs into the region. They also are looking for strategies that can help keep young Juneau residents in school, a step that would help employers in the region find workers with higher levels of education.

The County Health Department also has jumped in with an innovative strategy to help more young mothers to adopt healthier behaviors. The Rankings indicated that nearly 30 percent of Juneau County pregnant women smoked cigarettes, a rate that was twice as high as the state average. Theis says the county also was struggling with a teen birth rate that was too high.

In addition, Theis saw statistics showing that all residents of the county, including young women, had higher than average rates of obesity, a serious health problem that is associated with high risk of type 2 diabetes and heart disease.

To address all of those problems in one high-risk group, Theis homed in on high-risk pregnant women. These young women were taught about the health risks of smoking and the importance of being active and eating healthy foods, habits that can reduce the risk of obesity.

Another problem that surfaced as a result of the Rankings: Nearly 40 percent of county residents said they had not visited a dentist in the past year. When Theis looked into the issue she discovered that the dentists in the county wouldn’t take Medicaid because of low payment rates, a problem that has left many Americans nationwide without dental care.

Theis decided to use the poor scores on dental care to learn how to improve in this area. She called a nearby County Health Department, one that had scored highly on this health measure, and asked how they’d solved this problem. She found out that the county had a safety net clinic for people who had a low-income and were without dental insurance or the means to pay for oral health care.

Theis worked with partners in the community to establish a similar clinic in Juneau County. The clinic, which accepts Medicaid and treats patients on a sliding income scale, opened its doors in 2010.

According to a 2010 County Health Rankings report, a collaboration with the UWPHI and the Robert Wood Johnson Foundation, Juneau County’s rank has risen slightly. However, it is lower than Theis would like. County leaders say the information contained in this new report and in previous reports are helping the community set priorities to make Juneau a healthier place to live.

The key to bringing up Juneau County’s scores lies with a wide range of partnerships throughout the community, Theis says. “The County Health Department can’t do this alone. But by engaging other members of the community, the county has a good shot at providing ample opportunity for Juneau residents to live healthier lives.”