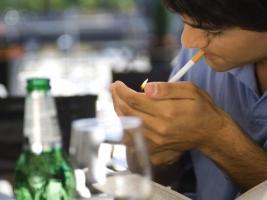 Tobacco use is the leading cause of preventable death in the United States. It affects not only those who choose to use tobacco, but also people who live and work around tobacco. The term “tobacco” on our website refers to commercial tobacco, not ceremonial or traditional tobacco.

Why Is Tobacco Use Important to Health?

Tobacco is not only smoked. Smokeless tobacco, while less lethal than smoked tobacco, can lead to various cancers, gum and teeth problems, and nicotine addiction. Almost 6% of young adults use smokeless tobacco and half of new users are younger than 18 [2].

Tobacco use has real economic impacts for individuals and communities. It costs the nation about $170 billion annually to treat tobacco-related illnesses, and another $156 billion in productivity losses. In 2006, over $5 billion of that lost productivity was due to secondhand smoke [1].

Researchers estimate that tobacco control policies have saved at least 8 million Americans [3]. Yet about 18% of adults still smoke. Each day, nearly 3,200 youth smoke their first cigarette, and 2,100 transition from occasional to daily smokers [1].

Continuing to adopt and implement tobacco control policies can motivate users to quit, help youth choose not to start, and improve the quality of the air we all breathe.

Percentage of adults who are current smokers.
Learn more

Use websites, computer programs, and other electronic means to provide information, strategies, or behavioral support to tobacco users who want to quit, sometimes with counseling or pharmacotherapy
Learn more

Mass media campaigns against tobacco use

Coordinate state and community-level cessation and prevention interventions and provide information on the dangers of tobacco using a combination of educational, regulatory, clinical, social, and economic strategies
Learn more

Increase tobacco price per unit through taxes at the federal, state, or local level
Learn more