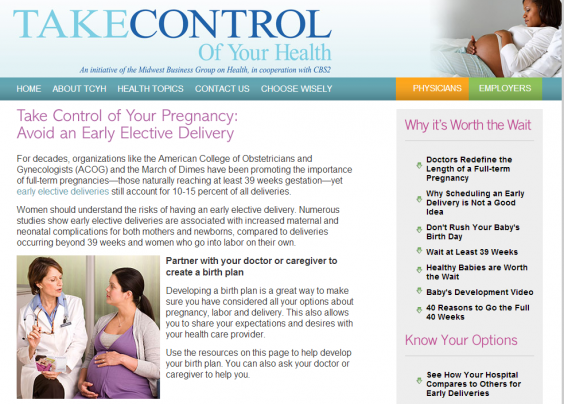 The Midwest Business Group on Health (MBGH), based in Chicago, is raising awareness about the importance of full term births and best practices for maternity care. The organization is working to reduce the number of non-medically related, elective-C sections and inductions prior to 39 weeks of gestation.  MBGH has unveiled a multifaceted education campaign targeting mothers, health plans, health care providers, employers and hospitals. The campaign includes public service announcements, a social media strategy and an informational website (www.tcyh.org) where an expectant mother can access tools and resources to help her better understand and manage her pregnancy. It offers information on why a full term (39 week) is critical to ensure a baby’s full development, resulting in better health outcomes for mother and child. The website also provides employers with information on how to improve maternity care at the worksite.

Larry Boress, President and CEO of MBGH, says that health outcomes are important as employers work to help build a productive workforce and reduce their overall benefit costs. Due to employees spending many hours at the worksite, employers have the opportunity to provide resources to provide information and tools to help employees become engaged in their health. The project’s resources on early deliveries encourage women to partner with their physicians and participate in decisions about optional approaches to address any health issue. Such efforts not only help employees remain productive but also contribute to thriving businesses. Additionally, if prevention and community health are not emphasized, employers can find themselves in a situation where their “healthy” population gets sicker over time. And if those with chronic disease do not properly manage their health, all this can lead to complications that drive health care costs up for the entire company. Boress and his members believe reducing early elective deliveries is a solvable issue. The number of unnecessary C-sections and inductions can be impacted if mothers are educated about the realities of delivering before the brain and lungs fully develop and the potential of future problems for mother and child.

According to The Leapfrog Group, nearly $1 billion dollars could be saved annually in the US if the rate of early term delivery was reduced to 1.7 percent.

MBGH’s efforts to raise awareness have included promoting the need for hospitals to adopt “hard stop” policies, requiring doctors to indicate a medical need when they seek to schedule a delivery before 39 weeks. Over the last years, MBGH has led a collaborative of physicians, health plans, consumers, employers, media and government entities to highlight the importance of full-term, 39 week pregnancies among health care providers and consumers. Due to this effort and those of the involved groups, Illinois has had success in reducing early elective deliveries —from 24 percent in 2010, to 12 percent in 2012 and 7% in 2013. Efforts to educate the community via Facebook, a media campaign, an employer toolkit and stakeholder outreach are also paying off. Boress says the MBGH model is a template that could be easily duplicated anywhere else in the county.

Boress believes the workplace needs to be seen as a component of the public health system in any community and it’s in the best interest of the business community to get involved in efforts toward population health improvement. Due to their role as major purchasers of health care, businesses are often in a better position to be conveners, drivers of change, catalysts and facilitators in ways a non-profit or traditional public health group cannot. A business group, such as MBGH, can successfully bring competing hospitals, insurers, and providers together because as purchasers of health care plans, providers cannot afford to ignore their calls for action. Also, purchasers can drive action based on what they are willing to pay for—for instance, one payor in Illinois, the Medicaid program, will not pay for early elective deliveries. He says, ultimately, payers can incentivize longer pregnancies through payment reform and public reporting of physician and hospitals early elective delivery rates.

While MBGH has contributed to health improvement in Illinois in this area, Boress says the ultimate goal is to reduce early elective delivery rates to close to zero. He says this will happen once early deliveries are no longer allowed to be scheduled for the convenience of the doctor or expectant mother. MBGH will know it has met these goals when women begin discussing their preference for a full-term birth with their providers, and when they choose a provider based on their philosophy regarding early delivery.

In early April 2013, the Midwest Business Group on Health, along with eight other business coalitions through the National Business Coalition on Health, received a grant from the Robert Wood Johnson Foundation and United Health Foundation to improve the health of their community. The National Business Coalition on Health is a national partner of the County Health Rankings & Roadmaps program.