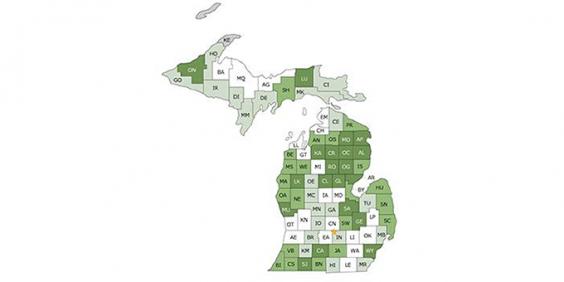 Detroit, MI, is one of the most racially segregated cities in the country, with high crime, poverty and unemployment; poor public transportation; and vast food deserts that prevent residents from easily accessing healthy foods. In 2011, the County Health Rankings ranked Wayne County—where Detroit is located—81 out of 82 counties in Michigan for health outcomes and dead last for health factors.

But Detroit is also a very resilient city, where people know how to tackle complex challenges. For example, residents of the Joy-Southfield neighborhood have drawn upon the Rankings to help transform their corner of Detroit into a hub of activities aimed at improving community health.
“Once I got over the shock and anger of the County Health Rankings, I said ‘thank you’ because now we have a rational argument for obtaining grants and resources for addressing the root causes of poor health,” said Dr. David Law, executive director of the Joy-Southfield Community Development Corporation.
The Joy-Southfield Community Development Corporation (JSCDC) has operated in the neighborhood since 2001, initially offering sorely needed healthcare services to low-income, uninsured residents. However, after treating a number of common medical problems stemming from high rates of chronic disease, like diabetes and high blood pressure, the organization decided to expand its work to include more programs aimed at preventing community members from getting sick in the first place.

“Poor health in this country isn’t for lack of resources; it’s about investing in prevention,” Law said. “If we do a better job of preventing disease, health system reform will pay for itself. And preventing disease requires more than providing universal access to health care - we also need to address social and environmental factors that limit healthy options.”

The JSCDC has developed what Law calls an “ecological approach to promoting health equity,” that addresses each of the four factors measured by the County Health Rankings: health behaviors, clinical care, social and economic factors and physical environment. For example, several community groups and funders have already collaborated to empower youth through mentoring and community garden projects; renovate vacant properties to attract new businesses; improve community safety; provide job training and foreclosure prevention services; and educate the community about prevention and chronic disease management.
Law says the County Health Rankings data allows JSCDC and their numerous collaborators to focus their resources and engage local residents. Since 2010, JSCDC has used the County Health Rankings to leverage more than $500,000 in grant support, while also acquiring more strategic partners.
“Detroiters are not naïve about the complexity and depth of the challenges they face,” Law said. “At the same time, Detroit residents are extremely resilient and resourceful. Systematic and incremental transformation of this community is underway. It may take time, but when it comes to the Rankings, we’ll be ‘movin’ on up.’”