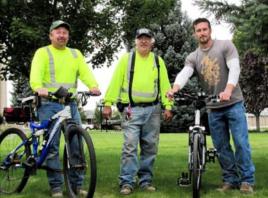 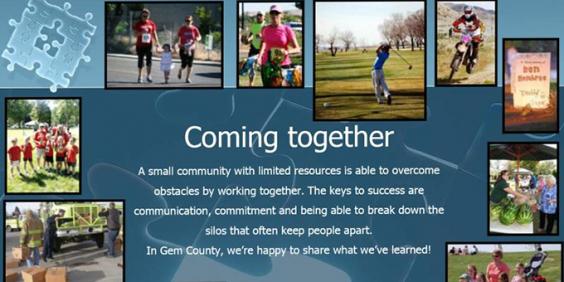 On the surface, Gem County, Idaho, looked like it had little to improve upon. Its county seat, Emmett (the only incorporated city in the county) was named among the top 100 small cities in America as well as “the best small city in Idaho.” But data told a different story, and in 2010 the community placed last among the County Health Rankings in Idaho for healthy behaviors – a sign that the community could do more to improve residents’ health.

News of the Rankings was a “wake-up call,” Bill Butticci, the mayor of Emmett, said. “We knew we had to take action.”

Gem County is an example of how a community that ranks “in the middle of the pack” can form a roadmap to improving its health (it placed 24th of 42 counties in the state in the 2013 County Health Rankings). The Rankings catalyzed a need in the community to improve health, and people, groups and organizations across the county came together to organize a response. The community formed a partnership, called the Gem County Community Health Connection group and spearheaded by Walter Knox Memorial Hospital, that incorporated a wide variety of partners.

“First we had to see where the problems where,” Butticci said. “That’s how we came together as a group.”

One of the first orders of business for the Connection was to identify target areas to focus on. The group conducted a community exercise from the CDC called CHANGE (Community Health Assessment aNd Group Evaluation ), said Abra Dodson, director of the Gem County Recreation District. The process took a couple of months and resulted in identifying tobacco use, obesity, and chronic disease as focal points.

With few financial resources at its disposal, the Connection began its work to by targeting free or low-cost programs – opening up opportunities for people across the entire community to get involved. It joined Michelle Obama’s Let’s Move! Campaign and set goals to educate the community about tobacco use, establish walking trails, and more.

The area also became the first in the state to ban smoking in certain buildings and park space. Another initiative incentivized public employees to adopt healthier lifestyles, resulting in zero or small increases to insurance rates.

Dodson said the key to the group’s early success was to absorb as much information as they could and adapt it to fit Gem County.

“We go out and look at the people who are winning and how we can bring that back here,” Dodson said.

Those in the Connection know that measures such as the Rankings are just a start of the work, and you can’t just refer to a total number to see the effect of your work. Looking at individual measures and keeping an eye on progress in health factor categories will be how the efforts are evaluated, Butticci said.

“We’re a little surprised that we made it this far this quick,” Butticci added. “We need to move forward.”

Now the group is shifting into a longer-term focus, identifying sustainability for its efforts, a place to house the programs it’s launched, and how policies can secure the improvements for years to come.